Time for a new idea... An old blend with a modern twist

So its time to get creative, with the majority of the Barrel Aged Negroni and the Barrel Aged Manhattan sold its time to batch up Negroni No.3 and Manhattan No.2. This whole process got me thinking... I want to branch out into some exciting new flavors and concoctions. We have had some AA Badenhorst Caperitif Kaapse Dief knocking around and we have been scratching our brains about what to do with it...

This vermouth from the cellar of Kalmoesfontein in Swartland is from the mountain slopes of the Paardeberg, a Chenin Blanc fortified with spirit, gently sweetened by the sugar of the grapes, bittered by Quinchona bark and flavoured with some 35 truly Cape ingredients such as fynbos, kalmoes and naartjies.

A fantastic vermouth, with a distinctively South African accent - bitter-sweet, grassy, with clementine-peel notes coming through strong and clear, top notes of clove, rooibos and ginger.

With this in mind I present to you the blueprint for something that is truly unique to Love Wine and something I have not seen anywhere on the cocktail scene thus far. Needless to say it could go horribly wrong as this is a grape styled vermouth which can and will oxidize. I will need to closely monitoring this barrel to see if these oxidation notes will consume the end product!

I take my inspiration from the original Martinez cocktail which was born out of the evolution of the classic gin Martini. With one of my favorite flavoured brandies 'apricot' and a good splash of Gin. The idea with this unknown blend is intriguing as well as a test of balance, elegance and the right amount of oak integration. I am not searching for masses of oak instead looking for a smooth integration process mingling these clementine notes with a smokiness combined with the apricot with a spike of juniper in the background from the gin.

I want to enhance this already vivid glossy colour and elevate it to silk in a glass! At the best of times this cocktail without barrel aging is a master piece so I am truly looking forward to seeing the finished product when its ready for consumption.

Linking back to my first blog you might remember I was concerned that each barrel may only be fit for three uses before they enter their retirement phase. So before we hang these beautiful hand crafted barrels I have ordered another two barrels both 5 litre, with the view to scaling up next time around to 10 litre or 50 litre barrels. Lets see how we get on with this new idea before going all guns blazing with the 50 litre barrels!

By 1922 the Martini reached its most recognisable form in which London dry gin and dry vermouth are combined at a ratio of 2:1, stirred in a mixing glass with ice cubes, with the optional addition of orange or aromatic bitters. Then strained into a chilled cocktail glass. Over time the garnish became the drinker's choice of either a green olive or a twist of lemon peel.

A dry Martini is made with dry, white vermouth. By the roaring twenties, it became common to ask for them. Over the course of the century, the amount of vermouth steadily dropped. During the 1930s the ratio was 3:1 (gin to vermouth), and during the 1940s the ratio was 4:1. During the latter part of the 20th century, 6:1, 8:1, 12:1, 15:1 (the "Montgomery", named after British Field Marshal Bernard Montgomery's supposed penchant for attacking only when in possession of great numerical superiority), or even 50:1 or 100:1 Martinis became considered the norm.

A dirty Martini contains a splash of olive brine or olive juice and is typically garnished with an olive.

Some Martinis were prepared by filling a cocktail glass with gin, then rubbing a finger of vermouth along the rim. There are those who advocated the elimination of vermouth altogether. According to Noel Coward, "A perfect Martini should be made by filling a glass with gin, then waving it in the general direction of Italy," Italy being a major producer of vermouth. Luis Bunuel used the dry Martini as part of his creative process, regularly using it to sustain "a reverie in a bar". He offers his own recipe, involving Augustura bitters, in his memoir.

There are a number of variations on the traditional Martini. The fictional spy James Bond sometimes asked for his Vodka Martinis to be "shaken", not Stirred," following Harry Craddock's The Savoy Cocktail Book (1930), which prescribes shaking for all its Martini recipes. The proper name for a shaken Martini is a Bradford.

However, Somerset Maugham is often quoted as saying that "a Martini should always be stirred, not shaken, so that the molecules lie sensuously on top of one another." A Martini may also be served on the rocks; that is, with the ingredients poured over ice cubes and served in an Old-Fashioned glass.

So after a brief and quick over view of where the Martini came from we push onto the Martinez and why this cocktail has been chosen to be re-mastered.

The exact origin of the martini is unclear. In 1863, an Italian vermouth maker started marketing their product under the brand name of Martini, after its director Alessandro Martini, and the brand name may be the source of the cocktail's name.

Another popular theory suggests it evolved from a cocktail called the Martinez served sometime in the early 1860s at the Occidental Hotel in San Francisco, which people frequented before taking an evening ferry to the nearby town of Martinez. Alternatively, the people of Martinez say the drink was first created by a bartender in their town, or maybe the drink was named after the town. Indeed, a "Martinez Cocktail" was first described in Jerry Thomas' 1887 edition of his "Bartender's Guide, How to Mix All Kinds of Plain and Fancy Drinks": 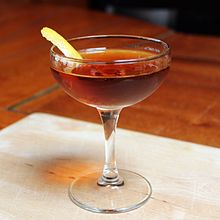 So there you have it, I'm excited to find out how my first batch of South African inspired Martinez turns out. I'll let you know when I have the finished article!

For those who wish to seek an excellent alternative refreshment I have a few bottles of the Negroni Batch No.2 and a few bottles of my favourite batch so far, Manhattan batch No.1 in-store soon to be online.